Tom Roza presents the video, “Ulysses S. Grant and the Virginia Campaign in 1864” 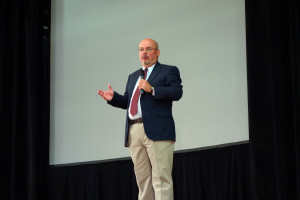 As part of the 150th anniversary of the American Civil War, the Gettysburg College Civil War Institute hosted its Annual Summer Conference. One of the featured events was “U.S. Grant and the Virginia Campaign in 1864,” presented by Brooks Simpson, an American historian and History Professor at Arizona State University.

Simpson is the author of six books, the coauthor of two more, and the editor or coeditor of eight other books and is perhaps best known for his work on Ulysses S. Grant. At the Gettysburg College Civil War Institutes’s Summer Conference held in June 2014, Professor Brooks Simpson discussed Union General Ulysses S. Grant’s Overland Campaign, which was a series of battles fought in Virginia during May and June of 1864.

The presentation will be a video streamed from C-SPAN’s web site.