Q#2 – On March 15, 1861, Lincoln met with his Cabinet to make a decision regarding what Union military location?

Q#6 – What action did the US Congress perform on March 3, 1863, that affected the staffing of the Union armies?

Q#9 – On March 9, 1864, what action did General Henry Halleck voluntarily take that affected the command authority of US Grant?

Q#10 – What Union military campaign located in the western portion of the country began on March 10, 1864?

Q#12 – What action did President Lincoln take on March 21, 1864, that affected Nevada and Colorado? 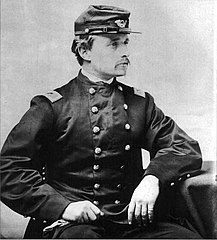 While the movie Glory did an exceptional job of telling the story of Gould and the 54th Massachusetts, Tom’s presentation told a more complete story of the first Negro regiment and the man who led them. END_OF_DOCUMENT_TOKEN_TO_BE_REPLACED