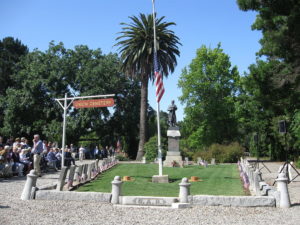 Civil War Quiz: What Do You Know About Confederate Government?

Q#2 – There were no official Confederate National Anthems. However, there was an unofficial anthem – what was it?

Q#3 – What was the Provisional Confederate Congress?

Q#5 – The Preamble to the US Constitution begins with the phrase “We the People of the United States, in Order to form a more perfect Union…” What was the opening phrase of the Confederate Preamble that signified the stark difference in governmental philosophy?

Q#6 – How many articles were contained in the Confederate States Constitution? How many amendments were added?

Q#7 – In addition to the President and Vice President, what were the names of the other Confederate Cabinet Offices?

Q#8 – During the course of the Civil War, which Confederate Cabinet Offices did Judah P. Benjamin hold?

Q#9 – What famous American historical figure is on the Great Seal of the Confederate States of America?

Q#10 – The First Confederate Congress did not meet on a continuous basis. How many sessions did it hold?

Q#11 – What was the name of the politician who fulfilled the role of President of the Confederate Senate?

Q#12 – How were Confederate Senators determined?

Q#13 – In the Confederate Congress, there were three regions that were represented by non voting members of the House of Representatives. What were the names of those regions?

Q#14 – What was the name of the politician who was Speaker of the Confederate House of Representatives for the Second Confederate Congress that began session in May, 1864?

Q#15 – What was the date of the last session of the Second Confederate Congress?