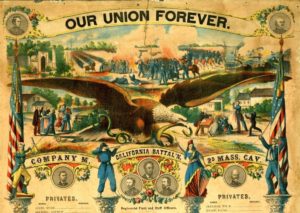 Civil War Quiz: What Do You Know About What Civil War Soldiers Ate?

Q#1 – Why was there never enough meat for Confederate soldiers?

Q#2 – By 1863, next to planning strategy and tactics, what did Confederate generals spend most of their time on?

Q#3 – What seasoning ingredient was sometimes added to beef and always added to pork?

Q#4 – What were the most common field rations issued to individual Union soldiers?

Q#5 – What was a major problem that affected the quality of food?

Q#6 – Condensed milk was very helpful in supplementing the rations for the Union army. Who invented it?

Q#9 – Due to its wide availability throughout southern North America, what item was also an important source of food for Confederate soldiers?

Q#10 – What was the name of the military unit that existed in both armies that had the responsibility to organize the feeding of soldiers during the war?

Q#11 – How was the common dish named “Skillygalee” prepared?

Q#12 – For Confederate soldiers, how was another common dish named “coosh” prepared?

Q#13 – What was a “Spirit Ration” that during the American Civil War both armies provided to their troops?

Q#14 – What was the name of the book written in 1853 by William J. Hardee that contained the guidelines for providing food rations for soldiers?

Q#15 – What were the three main reasons that hampered the Confederate government attempts to provide adequate rations for their troops?

A Congress of Civil War Round Tables being held in Centreville, Virginia, September 16, 2017.