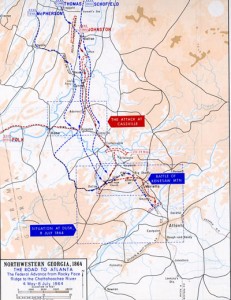 Larry’s talk covered two campaigns proceeding at the same time in the spring of 1864. The first of these was the military campaign of the army group under General William T. Sherman to attack General Joe Johnston’s Army of Tennessee encamped at Dalton, GA and to drive towards Atlanta, GA. The key figures in the three armies making up the force were presented. The logistics of the campaign was discussed with particular reference to the Western & Atlantic Railroad that supported both armies (from each end). Two significant battles of this military campaign (Resaca and the Battle of Atlanta) were emphasized. This campaign was one of the five campaigns directed by the new commander of the Union Army, Lt. General U.S. Grant. By mid-July the Atlanta campaign was the only one with any likelihood of significant military success. This was the result of the Army of the Potomac being in a standoff with the Army of Northern Virginia with both entrenched around the Richmond-Petersburg lines. END_OF_DOCUMENT_TOKEN_TO_BE_REPLACED