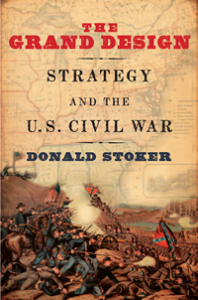 There are more than 60,000 books on the Civil War. None provide a full discussion of the conflict’s strategy—except Donald Stoker’s Grand Strategy in the Civil War. Stoker, of the U.S. Naval War College’s NPS program, reveals, in the words of the presidents, generals, and admirals, the grand, strategic sweep of the war. The much maligned George McClellan had a vision of Union strategy stretching far beyond his ill-fated Peninsula campaign, one that could have produced Union victory in 1862. The clearest picture yet of Lincoln’s evolution as a strategic thinker also emerges, one in which his clarity and decisiveness in political thought and control shines through just as brightly as his strategic failures. Lincoln had many good strategic ideas, but too often he failed to insure that his subordinates carried them out. One of these, Henry Halleck, McClellan’s successor, cost the Union many lives, and was one of the reasons Union victory was so long delayed. Grant and Sherman emerge as decisive operational and strategic thinkers. Sherman, in many respects, was the best of all. END_OF_DOCUMENT_TOKEN_TO_BE_REPLACED