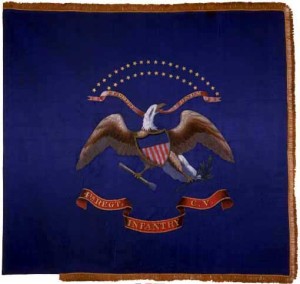 This is the second of an eight-part series on California and the American Civil War. This series explores California’s role and contribution to the Union with an emphasis on the military aspect of the conflict. Part one outlined California’s political and military situation in April of 1861. The third part will summarize Californian soldiers in units credited to other states, including the famous “California Hundred” and California Battalion. END_OF_DOCUMENT_TOKEN_TO_BE_REPLACED

Civil War Quiz: Facts Regarding the Army of the Potomac

Q#2 – Who was the very first commander of the Army of the Potomac before it was assigned that name?

Q#3 – It is a popular, but mistaken, belief that John Pope commanded the Army of the Potomac after McClellan’s unsuccessful Peninsula Campaign. What Union Army did Pope command at that time?

Q#4 – The Army of the Potomac underwent many structural changes during its existence. In November 1862, how did Ambrose Burnside structure the Army?

Q#5 – True or False: The Confederates also had an army named the Army of the Potomac.

Q#6 – Who was responsible for establishing the corps structure in the Army of the Potomac?

Q#7 – Once corps were established, what was the criteria for appointing corps commanders?

Q#9 – Who took over command of the Army of the Potomac after George Gordon Meade?

Q#10 – After taking command, what structural action did General Joseph Hooker implement regarding the cavalry?

Q#12 – After Major General George G. Meade became Commander of the Army of the Potomac, who took brief temporary command during Meade’s absences on four occasions?

Q#13 – The “Fighting 69th” New York Infantry was part of which brigade?

Q#14 – Due to attrition and transfers, the army was reorganized in March 1864 with only four corps. Name these corps.

Q#15 – After the end of the war, what was the disposition of the Army of the Potomac?