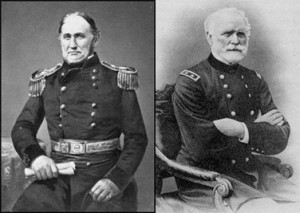 Patrick’s presentation included an overview of the Mexican-American War, 1846-1848, beginning with the actions of President James K. Polk that were, to a great extent, factors that precipitated the conflict. Patrick then sequenced the significant battles of the war, beginning with the first major battle, May 8, 1846, at Palo Alto, adjacent to modern day Brownsville, Texas, and concluding with the culminating battles of the war at Churubusco (on September 19, 1847) and Chapultepec (September 14, 1847). Gen. Winfield Scott’s troops continued to occupy Mexico City until the signing of the Treaty of Guadalupe Hidalgo on May 22, 1848 which officially ended the war. END_OF_DOCUMENT_TOKEN_TO_BE_REPLACED