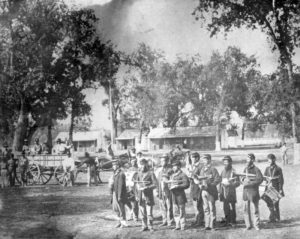 Civil War Quiz: Do You Know Who These Civil War Generals Are?

Q#1 – Before the Civil War, this Union general was the Speaker of the House in the US House of Representatives. What’s his name?

Q#3 – This Union general commanded the Army of the Ohio at the Battle of Shiloh in 1862. What’s his name?

Q#4 – At the Battle of Gettysburg, this Confederate general was captured by a Union soldier, Private Patrick Maloney of the 2nd Wisconsin, where he was taken behind enemy lines and briefly met an old colleague, Union General Abner Doubleday. This Confederate became the first general officer to be taken captive from the Army of Northern Virginia since General Lee assumed command. What’s his name?

Q#5 – This Union general fought in the Seven Days Battles at Gaines’ Mill on June 27, 1862, where he was wounded but demonstrated the bravery that was eventually recognized in 1892 with the Medal of Honor. What’s his name?

Q#6 – Before the Civil War, this Confederate general who was born in Ireland enlisted in the 41st Regiment of Foot of the British Army. During his three years there, he subsequently rose to the rank of corporal. What’s his name?

Q#7 – This Union general requested reassignment after quarreling with General Joe Hooker after the Battle of Chancellorsville. He then commanded the newly created Department of the Susquehanna during the Gettysburg Campaign in 1863. What’s his name?

Q#8 – Before the Civil War, this Confederate general was a member of the Whig political party and strongly opposed secession at the April 1861 Virginia convention. However, he was soon roused by the actions of the Federal government when President Abraham Lincoln called for 75,000 volunteers to suppress the rebellion. What’s his name?

Q#9 – After the Civil War, this Union general was elected as the 20th President of the United States in 1881 and became the second president to die by assassination. What’s his name?

Q#10 – This Confederate general was court-martialed by Stonewall Jackson for his actions in command of the Stonewall Brigade at the First Battle of Kernstown, and was subsequently killed during Pickett’s Charge at the Battle of Gettysburg. What’s his name?

Q#11 – This Union general led the XX Corps competently in the 1864 Atlanta Campaign under Sherman, but asked to be relieved before the capture of the city because of his dissatisfaction with the promotion of Maj. Gen. Oliver O. Howard to command of the Army of the Tennessee, upon the death of Maj. Gen. James B. McPherson. This general had seniority over Howard. What’s his name?

Q#12 – This Confederate general’s first field assignment was commanding Confederate forces in western Virginia, where he was defeated at the Battle of Cheat Mountain and was widely blamed for Confederate setbacks. He was then sent to organize the coastal defenses along the Carolina and Georgia seaboard and appointed commander, “Department of South Carolina, Georgia and Florida” on November 5, 1861. What’s his name?

Q#13 – This Union general on November 25, 1862, was arrested and court-martialed for his actions at Second Bull Run. By this time, McClellan had been relieved by President Abraham Lincoln and could not provide political cover for this general who was McClellan’s protégé. This Union General’s association with the disgraced McClellan and his open criticism of Union General Pope were significant reasons for his conviction at court-martial where he was found guilty on January 10, 1863, of disobedience and misconduct, and was dismissed from the Army on January 21, 1863. What’s his name?

Q#15 – On October 16, 1863, this Union general was assigned command of the newly formed Division of the Mississippi, including the Armies of the Ohio, Tennessee, and Cumberland. His first order was to put General George Thomas in charge of rescuing the Army of the Cumberland, which had retreated into Chattanooga where they were trapped. What’s his name?