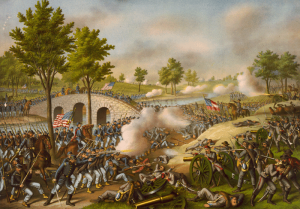 Burnside’s Bridge at the Battle of Antietam (Wikipedia)

Tom concluded his study of the Maryland Campaign.

The Battle of Antietam, or as the Southerners refer to it, The Battle of Sharpsburg, has always been referred to as the Bloodiest Day in American history. That is because in approximately 12 hours of horrific combat, approximately 23,000 casualties were inflicted. But, Antietam was much more than just the bloodiest day in our military history. It was as the Civil War Historian James M. McPherson labeled it, “The Battle That Changed the Course of the Civil War.”

Tom’s research on Antietam has uncovered many critical events and factors proceeding September 17, 1862, that influenced dramatically what occurred on the outskirts of that little Maryland town by a lazy flowing creek.