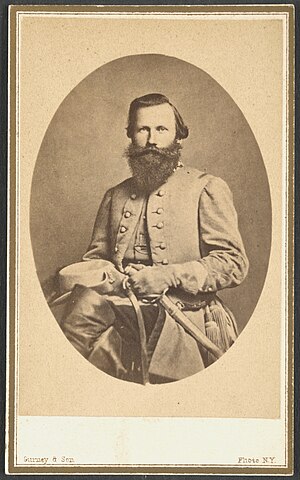 Q#1 – Who was President Abraham Lincoln’s first Secretary of War?

Q#2 – Who was President Jefferson Davis’s first Secretary of War?

Q#3 – What was the name of the only Confederate Vice President?

Q#4 – What was the name of the President Abraham Lincoln’s first Vice President?

Q#5 – What was the name of the Governor of South Carolina when that state seceded from the Union in December 1861?

Q#6 – When George McClellan ran for President in 1864, who was his Vice Presidential running mate?

Q#7 – For the Presidential election of 1864, there was a splinter political party given the name the Radical Republicans. What was the name of their Presidential candidate who withdrew before the actual election?

Q#8 – What were the names of the two Confederate Commissioners that were taken prisoner by Union naval personnel off the British ship Trent while traveling in England in 1861?

Q#9 – Who was the first Speaker of the Confederate House of Representatives?

Q#10 – Who was the Speaker of the US House of Representatives at the start of the Civil War in April, 1861?

Q#11 – During President Lincoln’s time in office, who held the cabinet position of Secretary of Commerce?

Q#12 – What was the name of the Governor of Maryland in 1861 who opposed abolitionists and supported slave owners, but also sought to prevent Maryland from seceding and joining the Confederacy?

Q#13 – Who was the Confederate States’ first Attorney General, who later was named its Secretary of War?

Q#14 – What was the name of the US Congressman who during his term in office introduced the first bill for a constitutional amendment abolishing slavery that eventually led to the adoption of the 13th amendment to the US Constitution?

Q#15 – What was the name of the Governor of Massachusetts who authorized the creation of the first Negro military unit in the Union Army, the 54th Massachusetts Regiment?