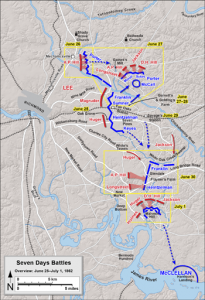 In the Peninsula Campaign of 1862, Maj. Gen. George B. McClellan landed his Army of the Potomac at Fort Monroe, Virginia, and slowly advanced up the Virginia Peninsula in an attempt to capture the Confederate capital of Richmond. At the indecisive Battle of Seven Pines (Fair Oaks), the Confederate commander, Gen. Joseph E. Johnston, was severely wounded and soon replaced with Gen. Robert E. Lee. In late June, Lee launched a series of attacks against McClellan that have come to be known as the Seven Days Battles, including the battles of Mechanicsville, Gaines’s Mill, Glendale, Malvern Hill, and a few other (comparatively) minor engagements. Some historians describe the Seven Days as a campaign, others as a lengthy battle with daily engagements. If you subscribe to the latter view, the Seven Days ranks behind Gettysburg as the second bloodiest battle of the war, with approximately 36,000 casualties. Hal gave a brief overview of the initial movements and battles in the Peninsula Campaign, and then described each of the Seven Days in detail. He discussed the strategic importance of the campaign and gave his opinions on the effectiveness (or lack thereof) of the two opposing commanders. END_OF_DOCUMENT_TOKEN_TO_BE_REPLACED

Based on “The Seven Days Battles” by Hal Jespersen

Q#1 – On what date did the Seven Days Battle begin? END_OF_DOCUMENT_TOKEN_TO_BE_REPLACED