LeRoy Wiley Gresham was born to an affluent slave-holding family in Macon, Georgia. A horrific leg injury left him an invalid, and the educated, inquisitive, perceptive, and exceptionally witty 12-year-old began keeping a diary in 1860–just as secession and the Civil War began tearing the country and his world apart. He continued to write even as his health deteriorated until both the war and his life ended in 1865. His unique manuscript of the demise of the Old South—lauded by the Library of Congress as one of its premier holdings—is published here for the first time in The War Outside My Window: The Civil War Diary of LeRoy Wiley Gresham, 1860-1865.

LeRoy read books, devoured newspapers and magazines, listened to gossip, and discussed and debated important social and military issues with his parents and others. He wrote daily for five years, putting pen to paper with a vim and tongue-in-cheek vigor that impresses even now, more than 150 years later. His practical, philosophical, and occasionally Twain-like hilarious observations cover politics and the secession movement, the long and increasingly destructive Civil War, family pets, a wide variety of hobbies and interests, and what life was like at the center of a socially prominent wealthy family in the important Confederate manufacturing center of Macon. The young scribe often voiced concern about the family’s pair of plantations outside town, and recorded his interactions and relationships with “servants” Howard, Allen, Eveline, and others as he pondered the fate of human bondage and his family’s declining fortunes.

Unbeknownst to LeRoy, he was chronicling his own slow and painful descent toward death in tandem with the demise of the Southern Confederacy. He recorded—often in horrific detail—an increasingly painful and debilitating disease that robbed him of his childhood. The teenager’s declining health is a consistent thread coursing through his fascinating journals. “I feel more discouraged [and] less hopeful about getting well than I ever did before,” he wrote on March 17, 1863. “I am weaker and more helpless than I ever was.” Morphine and a score of other “remedies” did little to ease his suffering. Abscesses developed; nagging coughs and pain consumed him. Alternating between bouts of euphoria and despondency, he often wrote, “Saw off my leg.”

The War Outside My Window, edited and annotated by Janet Croon with helpful footnotes and a detailed family biographical chart, captures the spirit and the character of a young privileged white teenager witnessing the demise of his world even as his own body slowly failed him. Just as Anne Frank has come down to us as the adolescent voice of World War II, LeRoy Gresham will now be remembered as the young voice of the Civil War South.

Theodore P. Savas is an award-winning author, attorney, publishing consultant, and the managing director of one of America’s leading independent publishing companies (Savas Beatie LLC: www.savasbeatie.com). Ted founded the South Bay Civil War Round Table in 1989; its first meeting of four people was held in his living room in San Jose.

Civil War Quiz: What Happened in the Month of August During the Civil War?

Q#1 – What significant event did the citizens of the State of Tennessee vote for on August 1, 1861?

Q#2 – On August 3, 1861, a Union naval officer performed what act for the first time from a ship stationed off Hampton Roads, VA?

Q#3 – What was the name of the first significant battle of the Civil War fought in the western theater, on August 10, 1861?

Q#4 – What was the name of the Union General who led the successful amphibious landing that captured Cape Hatteras, NC?

Q#6 – On August 14, 1862, what order did Union General-in-Chief Henry Halleck give to Union General George McClellan?

Q#8 – Union General Benjamin Butler on August 22, 1862, took what action regarding the recruitment of soldiers into the Army?

Q#9 – In the aftermath of the Battle of Gettysburg, on August 8, 1863, what action did Robert E. Lee perform regarding his role in the Army of Northern Virginia?

Q#10 – What action began in Minnesota on August 18, 1863, that diverted Union military resources away from the Civil War?

Q#12 – What was the military engagement that occurred on August 5, 1864, where Union Admiral David Farragut is quoted as giving the following orders: “Damn the torpedoes, go ahead”?

Q#13 – On August 21, 1864, 2,000 Confederates led by Nathan Bedford Forrest occupied what city in Tennessee for a few hours during the day, nearly capturing Major Generals Stephen Hurlbut and C. C. Washburn? (The answer was included in Tom Roza’s April, 2017 Presentation on Forrest.)

Q#14 – What critical battle was fought on August 31, 1864, that led to the Confederates abandoning Atlanta, GA, a few days later?

Q#15 – What legislative action did the State of Mississippi perform on August 14, 1865? 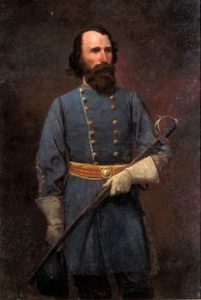 Civil War Quiz: What Do You Really Know About the Battle of Gettysburg?

Q#1 – What was the name of the battle fought on June 9, 1863, that involved Union and Confederate cavalry and preceded the Battle of Gettysburg?

Q#4 – What was the name of the Union cavalry officer who fired the first shot at the Battle of Gettysburg on the morning of July 1, 1863, in the vicinity of a stone bridge across Marsh Creek?

Q#5 – What were the names of the two Union colonels who commanded the two brigades under John Buford?

Q#6 – Jennie Wade was the only civilian killed at the Battle of Gettysburg when a skirmisher’s bullet pierced two wooden doors while she was standing in her sister’s kitchen kneading dough. Who built the coffin that she was buried in?

Q#7 – Early on July 2, Confederate General Longstreet made his arguments to Robert E Lee in favor of disengaging from Gettysburg and making a wide swing around the Union’s left flank. What reason did Lee give Longstreet for rejecting that suggestion?

Q#8 – Early on July 2, Union XII Corps division commander General John Geary was ordered to remove the two regiments he had stationed on Little Round Top and relocate them to Culp’s Hill. Geary recognized the danger of leaving Little Round Top undefended thus leaving the Union line open to being flanked by Confederates. Who did Geary notify of this concern and what was the response?

Q#9 – What was the name of the general who Union Commander George Meade ordered to accompany General Sickles in assessing if Sickles should relocate his III Corps from their position on the southern end of Cemetery Ridge further west to a line along the Emmitsburg Road? What was that general’s reaction to Sickle’s request?

Q#10 – On July 2nd, what was the name of the Union regiment that Union General Hancock ordered forward to close a large gap in the Union line on the south end of Cemetery Ridge that was being threatened by the Confederate General Cadamus Wilcox’s brigade?

Q#11 – On July 2nd, what was the name of the Confederate Division commander that General Lee had counted on to continue the echelon attack against the center of the Union Line on Cemetery Ridge, but was severely wounded before he could order his division forward?

Q#12 – At General Meade’s council of war on the evening of July 2nd, to facilitate the decision-making regarding options for the Army of the Potomac, Meade’s Chief of Staff General Daniel Butterfield wrote down three questions that the generals in attendance needed to answer. What were those three questions?

Q#13 – Lee’s initial plan for attacking on July 3rd involved two flanking attacks launched at the same time: Longstreet attacking the Federal center on Cemetery Ridge from his positions in the Peach Orchard and Devil’s Den; Ewell attacking southward from the trenches that General Johnson had seized on Culp’s Hill. Why did this plan disintegrate before it even had a chance to get started?

Q#15 – What was the final attack on July 3rd following the defeat of Picket’s Charge?