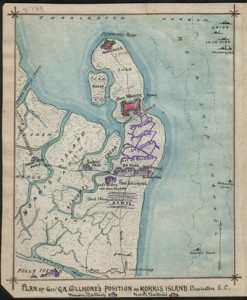 Gary described the failed attempt by the famed black 54th Massachusetts regiment to capture Battery Wagner on July 18, 1863 (depicted in the movie Glory). After the failure to seize the battery by coup de main, Gary described Gilmore’s plan to reduce it by a siege. He discussed all the aspects of a siege, including how parallel trenches were dug and zigzag approaches were prepared with saps and artillery to suppress the defense. The siege started on July 20th and was assisted by naval guns under the command of Admiral John Dahlgren. Gary then focused on the use of sharpshooters by the Confederates using superior Whitworth rifles purchased from England to harass the Union engineers building the trenches. This was so effective that the Union was initially forced to build the trenches only at night. The Union responded by forming a sharpshooter corps using standard Springfield rifles.

Gary went on to describe the different stages of the siege and the final success in establishing a parallel trench just 50 yards from Battery Wagner. On September 7th the Federal forces prepared to storm Battery Wagner, but the Confederates abandoned the battery as well as Battery Gregg. Gary mentioned that the campaign to capture Charleston was abandoned by orders of General Grant and the city was not captured until February, 1865.

The presentation was well received with many questions.