Tom Roza on “Winfield Scott Hancock – A Man for the Ages” 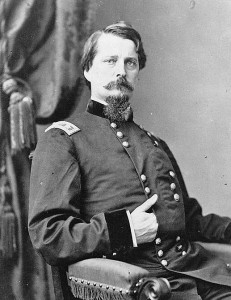 Tom delighted the club members his presentation on Winfield Scott Hancock. Tom provided a very thorough and detailed description of Hancock from his childhood growing up in Pennsylvania, attending West Point, and participating in his first combat during the Mexican War. The presentation included Hancock’s extensive experience as an Army Quartermaster in duty assignments that ranged from Florida, to the Midwest and Rocky Mountain regions and California. Tom described the deep and warm friendships that Hancock developed with fellow soldiers such as Lewis Armistead, Richard Garnett and Harry Heth.The presentation covered Hancock’s extensive Civil War experience in the Eastern Theater where he rose from a regimental commander to the best Corp commander in the Army of the Potomac. The Club members learned of Hancock’s post war experiences dealing with the Plains Indians, labor strife, and as military Governor of Louisiana where Hancock was the first Northerner to reach out to Southern citizens in an act of reconciliation. The presentation concluded with Hancock’s three attempts to become President of the United States and his final days as the ranking General in the Army up until his death in 1886.