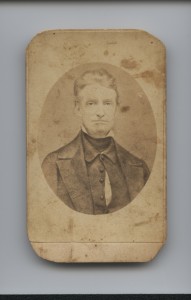 Jean’s original chronology in 2002 was made with forensic anthropologist Eileen Barrow at Louisiana State University, who specializes in making aging models of missing children. Her original research on the subject has convinced archivists and experts that some dates and places of commonly viewed photo images of John Brown were incorrect.

The final question is: Was there a photo made of Brown in 1859, after he shaved his beard previous to the raid on Harpers Ferry? There were no photographs made of John Brown in Virginia from the raid, trial and execution.

Mrs. Jean Libby is a retired teacher of history and ethnic studies at community colleges in northern California. She is the author of John Brown, Bearded Patriarch, published by Palgrave Macmillan in a collection entitled The Afterlife of John Brown, and “The John Brown daguerreotypes, a leader uses his likeness for remembrance and promotion” in The Daguerreian Annual 2002-2003. She is also the publisher and principal author of John Brown’s Family in California, an illustrated pamphlet-style book which features Santa Clara County history and locations.

A review of Jean’s book by Steve Wetlesen is presented here.

As to her thirty-four year project to assemble adequate documentation of this masterful collection of photographs and related provenance and general background pertaining to John Brown and his intense walk on the earth, who can say anything but Amen! Who can challenge her Jean Libby’s meticulous passion, her methodical lifework to piece together her life’s work? Who can comment or improve on perfection? Who can but gild the lily any saying anything but an elegantly understated, “Well done!”

The hangman has failed, utterly. The rope broke. The South lost the conflict before a single shot at Fort Sumter was fired. Jean Libby has brought John Brown to life, as though we all knew him as next door neighbor, just yesterday. Robert E. Le and John Wilkes Booth, with many others present at the Final Proceedings, now lie in their graves, buy John Brown? He looks as alive as ever, thanks to the historical work of Jean Libby.

And yet, as Jean Libby shows him afresh, all the depth showing on his face, or rather, his many faces, I don’t know John Brown. No one does. No one ever did, perhaps not even Brown himself. Yet know this: his photographs, his intent visage jump out at the viewer. Call it immortality if you will.

Who was John Brown, or, far more accurately, who is he? The several fine photographs cannot tell, yet not the finest painters that ever lived could render him either. We can only guess.

Is he prophet? (Of what? I cannot help wondering how to define his visions!) Is he mass murderer, or the holy bringer of long overdue, absolutely appropriate justice? Preacher/ (Of what Gospel?) Christlike? Or American Rasputin, without the tawdry romantic affairs? A father, or a bungling coward that failed his wife and children? Don Quixote or John the Baptist, with a dash of Moses sprinkled in for flavor? Angel or demon? Terrorist or misunderstood liberator? Catalyst and the voice of one crying in the wilderness for slavery’s downfall, or wild eyed fool? Did he set the stage for a scared crusade or just make things infinitely worse? Hero or Idiot King? Pirate without a sailing ship, freebooter or a living poem? A mind so addled narcotics and hallucinogenic drugs were not at all needed, or a pair of eyes that saw what no others perceive, down to this very day? Consigned to heaven or hell? An 1850s rock star, destined to be Dead and Grateful? Passionate Beethoven conducting himself as his own symphony, or a 19th century Jim Morrison, the bearded Lizard King who failed at everything? An heir to the sacred royal priesthood, or inspiration for Charles Manson?

And was it slaves he really wanted to set free, or was it a topic far deeper? And tell me, all you Generals, how did Brown win the war, before you even put on any uniforms? Was he the atomic bomb of abolition? Or a wet dud skyrocket that never lit up or got off the ground? Was he “the meteor of the war” or is he a comet that’s bound to return before long and kick up a rather large sized tsunami? Is the war even really over? (Is any war really ever over?) Moral victor or butt of well earned derision? Patriotic Saint of the Stars and Stripes or American Ayatollah? Perhaps he has a few answers.

Is he another comic opera Emperor Norton holding court over realms of pure folly, or does God appoint him one of the princes of celestial thrones? Would Dante recognize his visage in the Inferno, or did he start off the campaign that finally resulted in a child of Africa as our Commander in Chief? And who was really liberating, if anyone? Genius or cretin? Both?

A paradox, sir, a paradox and enigma greater than Einstein’s silly laws. The more we look at his photos, the less we understand. It was once said of the Greta Bard, when his revels were ended, “He was not of an age, but for all time.” In John Brown, Shakespeare finds company in being outside history.

Thank you very much, Jean Libby, for bringing us all more mystery and eternal questions. Ah, that piercing soul? Do we love him or revile him?